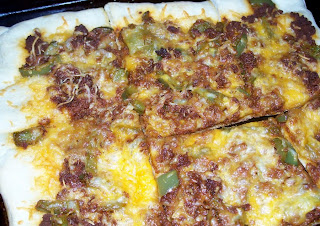 I know I said this before, but I love Mexican food. I cook it as much as I can without my husband getting sick of it. I am newer to chorizo. It is very hard to find in NEPA. I've only made it twice before. I think I prefer the Mexican variety, but I guess it depends on what you're making. I used the Spanish variety in a clam bake and the Mexican in breakfast burritos. This time we wanted to do something different with Mexican chorizo, so we chose pizza. The sweetness of the green peppers complemented the saltiness of the chorizo. We topped it with some salsa for heat and sour cream to cool it down. It was a nice balance. I will be making this again soon. Next time I will try some different types of peppers, maybe some poblanos or red and yellow bells, and maybe a Mexican cheese such as cotija or queso fresco. If you haven't tried queso fresco, you don't know what you're missing. And I might throw an egg or two on top.

Salsa and sour cream on the side

Remove chorizo from casing and squeeze into frying pan.

Chop pepper and add to chorizo.

Cook until chorizo is browned and peppers are done.

Bake according to pizza crust directions.

Top with salsa and sour cream.