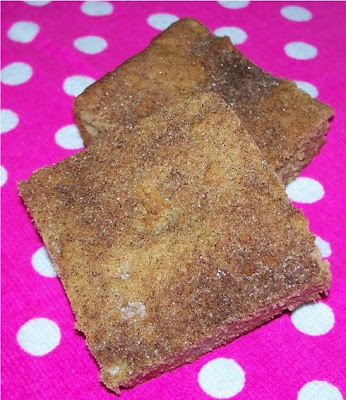 Happy Blogiversary to me!
So I'm a little late. I'm always late so it's fitting for me. My little blog turned one year old last week. So much has changed for me in the past year. After I started my blog, my love of food and baking continued strong. I started to debate if I could turn a hobby into something more. So I took a leap and I start pastry arts classes next month. A year ago I was just an editor with a hobby. Now I'm an editor with a dream of opening her own cupcakery. I guess only time will tell.
Since it's been so hot, I've been neglecting my blog lately. Who wants to turn on the oven in 90-degree weather? I was searching for something to take on a bus trip to a wine festival that wasn't too messy and would fill up our stomachs before hours of drinking. Randy suggested brownies. OK, I'm going to say it: I'm not a huge fan of brownies. It's the texture—too thick. Then I saw a recipe for snickerdoodle blondies and decided to give it a try. I've made blondies before and it wasn't love, but I decided to try them again. These were right up my alley. I love cinnamon and I love snickerdoodles. I figured these would be perfect for our trip. While they were tasty, it's the thick texture I can't get over. If you love cinnamon and blondies, then these are for you. I did love the crunch the cinnamon/sugar mixture on top added.
Snickerdoodle Blondies
Source: adapted from My Baking Addiction as seen on Brown Eyed Baker

Whisk together flour, baking powder, salt, cinnamon, and nutmeg in a bowl and set aside.

Beat together the butter and brown sugar on medium speed until light and fluffy. Add the eggs one at a time and vanilla and beat until thoroughly combined. On low speed, gradually add the flour mixture until just combined. (Batter will be thick like dough.)

Spread the batter evenly into the pan. Combine granulated sugar, cinnamon, and nutmeg in a small bowl. Sprinkle mixture over the top of batter.

Bake for 25 - 30 minutes. Cool completely before cutting. Store in an airtight container at room temperature.
Posted by Ange at Monday, July 19, 2010