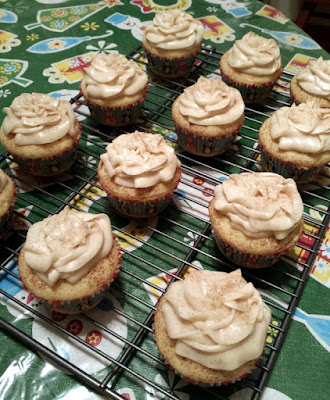 It's no secret that I love cupcakes. And cookies. One of my favorite flavors is cinnamon.  I love snickerdoodle cookies. So I decided to make a cinnamon-swirl cupcake in honor of my favorite cookie. I took a basic vanilla cupcake, added a cinnamon-sugar swirl, and topped with cinnamon cream cheese. It was the perfect amount of cinnamon, and the tang from the cream cheese frosting complimented the cupcakes perfectly.

Preheat oven to 350 degrees and line a cupcake tin with 12 cupcake liners.
In a bowl, whisk together flour, baking powder, and salt, and set aside.
In another bowl, beat together butter and sugar until light and fluffy. Add the eggs, one at a time, beating well after each addition. Beat in vanilla extract.
Turn mixer to low and alternately add flour mixture and milk in three additions, ending with flour.
Fill the cupcake liners about 1/3 full and top with a heaping teaspoon of cinnamon sugar. Top with batter until 2/3 full and sprinkle with cinnamon-sugar.
Bake for 18 - 20 minutes.
Cool completely on a wire rack.

Beat the butter, cream cheese, and vanilla extract on high speed until light and fluffy. With the mixer on low speed, add cinnamon, powdered sugar one cup at a time, and milk one tablespoon at a time, until desired consistency is reached. Beat well.
Posted by Ange at Wednesday, January 13, 2016