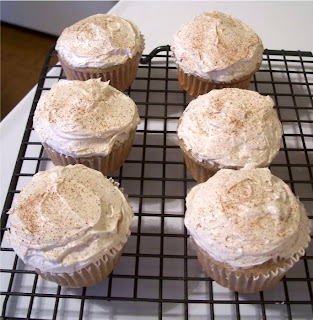 I love cinnamon! It's one of my favorite flavors. I was racking my brain for something to bake on Sunday. I was thinking about cookies, but I didn't feel like rolling a few dozen cookies. I found this recipe and my cookie craving was cured. They had a nice cinnamon-sugar flavor and tasted just like snickerdoodle cookies. The cake was moist and a little dense. It held together well. I topped them with a cinnamon swiss meringue buttercream dusted with cinnamon-sugar. I'm not sure that this icing was the perfect complement. I think next time I will use my cinnamon cream cheese icing.
Snickerdoodle Cupcakes
as seen on Cate's World Kitchen via Martha Stewart
Yields: 12 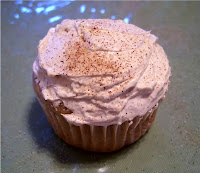 Directions:
Preheat oven to 350 degrees. Line a cupcake pan with 12 paper liners.
Whisk together flour, baking powder, and cinnamon and set aside. Cream together butter and sugar until light and fluffy. Beat in the eggs and vanilla.

Add 1/3 of the flour mixture and half the milk. Beat until combined. Repeat with remaining flour mixture and milk, ending with the flour mixture. Beat well.
Fill the cupcake liners 3/4 full. Bake for 16 - 20 minutes. Cool in the pans for a few minutes and then transfer to wire racks to cool completely.
Cinnamon Swiss Meringue Buttercream
3 teaspoons meringue powder
3 tablespoons warm water
6 tablespoons sugar
1 stick butter, cut into 8 pieces (room temperature)
2 teaspoons cinnamon
1 teaspoon vanilla
In a large heatproof bowl (or stand mixer bowl) combine meringue powder, water, and sugar. Place bowl over saucepan of simmering water and whisk constantly until sugar is dissolved. Remove from heat and transfer to stand mixer.
Using the whisk attachment, whip mixture on high until it holds stiff peaks (about 6 - 7 minutes). Continue beating and add the butter a few pieces at a time. Add cinnamon and vanilla.
Continue beating until buttercream is thick, smooth, and glossy (about 3 - 5 minutes).*
*If mixture starts to look curdled, keep beating.
Posted by Ange at Monday, February 01, 2010