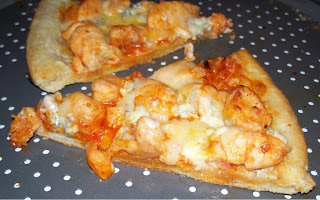 GO Penn State! As most people know, I graduated from Penn State and I am a huge PSU football fan. Randy and I managed to get to the homecoming game last weekend. They defeated the MN Golden Gophers 20-0. A very good game, despite the snow. Last night, I whipped up some buffalo chicken pizza for us while we were watching the game on TV. PSU played a good game and finally defeated Michigan on their turf—first time since 1997! This pizza is spicy and delicious, plus quick to whip up, especially if you use pre-made crust as I did. I made it during half-time with time to spare.

Saute chicken in canola oil in a skillet over medium-high heat, until no longer pink.

Cook according to crust directions.