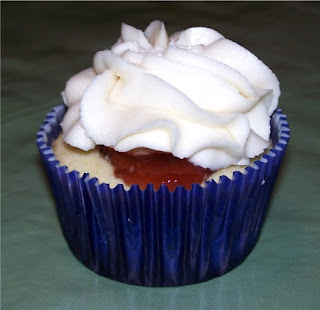 I love to bake, especially cupcakes! The recipe I used the other night for the apple pie cupcakes yielded over 30 cupcakes, so I had a few extra left over. I wanted something other than plain vanilla cupcakes, so I decided to fill them with raspberry preserves. I made these once before for my husband's birthday, but I topped them with cream cheese icing. This time I used buttercream since I already had a batch made for the apple pie cupcakes. I think these are my new favorite cupcakes—they were so good! Since I love to share my baking creations, I brought some of these into work with the apple pie cupcakes. These were the first ones gone. They were a huge hit and everyone raved about them.

Cupcakes:
Bake your favorite white cupcakes. (I used Martha Stewart's recipe. They are a denser cupcake and held up well when I added the preserves. I'm still on the hunt for the perfect white cake recipe, though.)

To fill cupcakes:
Use the cone method to remove a chunk from the center of each cupcake.
Put aside chunk of removed cake.
Fill the holes with seedless raspberry preserves.
Place chunk of cake back on top of cupcake like a plug.
Top with vanilla buttercream.
Posted by Ange at Tuesday, October 20, 2009