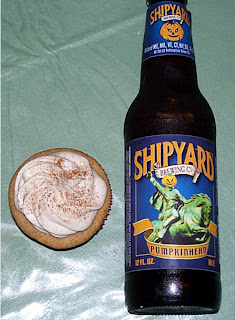 For all those Oktoberfest beer lovers, you have to try these! I stumbled upon these cupcakes on the Woman with a Whisk blog and knew I had to make them right away. I love October. It is the month I was married, it's fall, the leaves are changing, the weather is cooler, and best of all—Oktoberfest beer returns. We've sampled a few new seasonal beers this year and fell in love with Shipyard Pumpkinhead Ale. It's a wheat ale with subtle spices of pumpkin, cinnamon, and nutmeg. It's pumpkin pie in a bottle, but it's not overly spicy or flavorful. If you haven't tried it, get yourself to the nearest beer distributor and pick some up, but hurry since the season is almost over. These cupcakes were awesome. I thought they would taste mostly like pumpkin, but they really picked up the flavor of the beer. They're more of a spice cupcake with cinnamon undertones. I topped them with a cinnamon cream cheese icing. They are my new favorite cupcake. I stashed a few bottles of this beer from my husband, so I can whip a few more batches soon.
Oktoberfest Cupcakes with Cinnamon Cream Cheese Icing
adapted from Woman with a Whisk

Directions:
Preheat oven to 325 degrees.
Set up cupcake pan with 24 liners.
Whisk together flour, cornstarch, and spices and set aside.
In another bowl, beat together butter and brown sugar.
Add eggs and vanilla to butter/sugar mixture.
Beat until well incorporated.
Alternately add flour, then beer to butter mixture, beating on low.
Pour batter into cupcake liners, about 2/3 full.
Bake for 15 - 18 minutes.

Directions:
Cream together butter, cream cheese, and vanilla.
Add cinnamon and powdered sugar one cup at a time.
Beat well.
Top cupcakes with icing and a light dusting of cinnamon.
Store in refrigerator.
Posted by Ange at Sunday, November 01, 2009