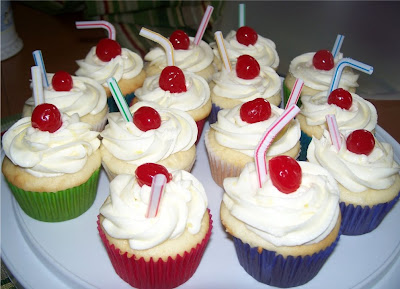 As I sit here writing this post, I have The Pina Colada Song playing over and over in my head. Nothing makes me think of summer more than pina coladas. Boy could I go for one right now. One of our good friends had a birthday over the past weekend and I continued my trend and baked him some cupcakes to celebrate. He is one of the only other people who loves coconut as much as I do. I made him tie-dyed coconut cupcakes last year, so I wanted to do something different.
These cupcakes consist of a coconut cupcake topped with pineapple buttercream. I had originally planned on topping them with this pineapple cream cheese, but it was a big, fat FAIL! (I must stress it was not the recipe and totally my fault!) I made these on a hot and humid day and had some icing issues. I never failed with making icing before. I have heard that people sometimes have trouble with cream cheese icing, but to me it is easy. Let the butter and cream cheese come to room temperature and it turns out perfectly, or so I thought. It was so hot in my kitchen that the butter and cream cheese got too warm and basically liquefied when I added the rest of the ingredients. I tried everything to save it: tons more powdered sugar, meringue powder, corn starch, putting it in the fridge for a few hours—nothing worked and it ended up in the trash.

Since I didn't have any more cream cheese and was running out of time, I opted for a simple pineapple buttercream, which was delicious and very sweet, but not as good as cream cheese icing would have been. And since I've been having issues with homemade white cake recipes, I used a box mix doctored up with some coconut extract and shredded coconut. I topped these with a cherry and a straw to look like a pina colada drink. They were enjoyed by everyone at the party. And my husband gave me a great compliment. He said he thinks he actually prefers the homemade white cupcakes to the box mix since the homemade ones aren't as light and fluffy. He actually now prefers the denser cupcakes he's been complaining about. Go figure. 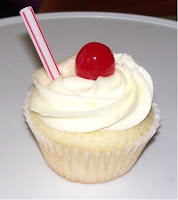